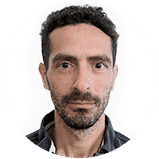 Previously, Rotem was the lead motion designer at Syneos Health, in which he oversaw animated PR campaigns for pharmaceutical companies such as Buyer and Ferring.

Prior to that he worked with leading advertising agencies and design studios to create animations for some of the world’s best knowns brands, from Coca-Cola to MasterCard and Vodafone.