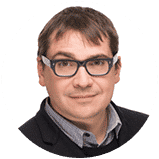 Michael Auerbach will serve on the Compensation Committee.

He is an entrepreneur, investor, business consultant, and private diplomat.

Michael started his career during the dot-com boom of the late 1990s running Panopticon Inc., a VC incubator concentrating on internet and mobile technology. Michael was the Executive Producer of Pseudo Programs – the first Internet Television network.

Mr. Auerbach has also held senior positions at the Center for American Progress and The Century Foundation, where he concentrated on issues related to U.S. Foreign Policy, National Security, and Conflict Resolution. His work has been published in a variety of national and international publications, and he served as a Visiting Professor at the New School for Social Research. He had also taught at the University of Cape Town and Cyprus College.

Mr. Auerbach presently sits on the boards of the Theodore C. Sorensen Center for International Peace and Justice, The KiDS Board of NYU’s Hassenfeld Children’s Hospital, Next for Autism, which produces Night of Too Many Stars, and Sophie Gerson Healthy Youth Foundation.

Mr. Auerbach received an M.A. in International Relations from Columbia University and a B.A. in Critical Theory from the New School for Social Research.