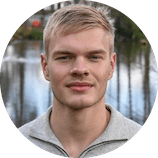 Max recently graduated from the University of Sydney where he completed a Bachelor of Arts & Science, majoring in Philosophy. Prior to working at ATAI, Max worked as a research analyst and as a volunteer for charities based in England and Zimbabwe. What got Max interested in the mental health space were his own experiences; from a young age, he struggled with undiagnosed anxiety and depression, which subsequently developed into substance use disorder.

After getting sober at a young age, Max struggled with life in sobriety and was eventually put on a variety of psychotropic medications which paradoxically aggravated his condition. While he admits it was a risk at the time, along with the guidance of other recovering addicts, Max took the decision to integrate psychedelics in his recovery – which he says had saved his life. Through the experiences themselves and subsequent integration work, Max claims that he went from being a man deeply rooted in fear and self-obsession, to someone with unabated hope and a deep sense of serenity. Consequently, he wanted to be a part of the movement which strives to get effective psychedelic and non-psychedelic therapies to the wider public through de-stigmatization, education and scientific innovation.

Max’s role is in communications and public relations, with aspirations to both help grow ATAI’s brand and advance its mission in bridging the gap between what the mental health system can provide and what the people need.